For as long as I can remember, Halloween has been one of my favorite holidays. Probably mostly due to the facts that my birthday is so close, and my mom always created amazing costumes for me to wear - even when I was in college and the holiday became less about collecting copious amounts of candy, and more about drinking copious amounts of beer. Oh, college.

Lucky for Anna (and me), my mom is still willing to whip out her sewing machine when I get an idea, and this year's costume may be the cutest yet. I'll let you be the judge of that... 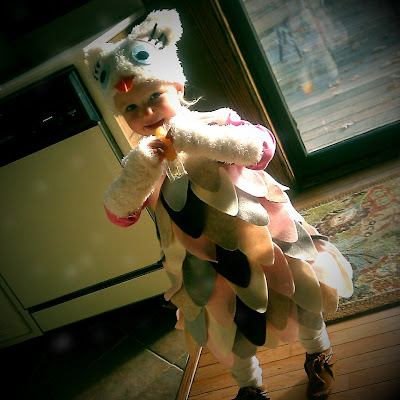 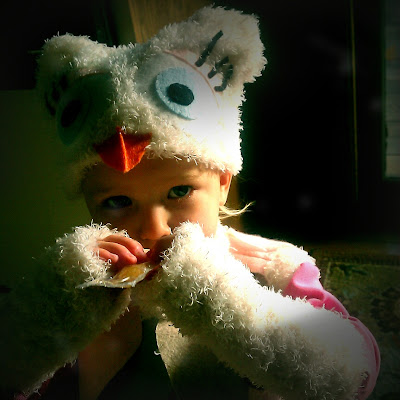 We met up with some friends Thursday evening to take the little ones to downtown East Lansing for the Pumpkin Walk. I know I was way more excited that Anna was, at least this year, since she had no clue what was coming her way. A wagon ride, hanging out with Elmo and the White Swan, and unlimited candy, popcorn, and donut holes just might have convinced her that Halloween is where it's at.

I did mention my birthday, didn't I? So I guess there's no denying that I am now officially thirty. It's funny, because when you are eighteen, the prospect of turning thirty can be scary and daunting - it just seems so darn old. Now that I'm here, though, it's almost the opposite. Yes, yes, being a teenager is fun, what with its carefree days and late nights and endless possibilities. But I'd trade all that freedom for what I have right now, in a heart beat.

My day was lovely, filled with insanely delicious French toast, phone calls, cards, and emails from my loved ones, and this:


And just when I thought it couldn't get any better, Mike threw me a surprise party, and it got much, much better. It was the perfect ending to my day - a small gathering of some of the most important and loved people in my life, and I don't think the smile left my face all night. 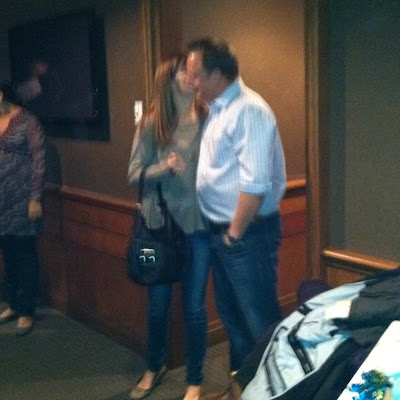 I am a lucky girl.


Trick or Treat!
Happy Monday!
Posted by Leslie at 11:18 AM 1 comments

I had many a good intention of getting this post out much, much earlier in the week. But wouldn't you know it, it's now Friday and I'm scrambling to get it together. Hmmm...seems like that's sort of a theme in my life, doesn't it?

Sunday was race day, and as you're probably sick of hearing, my left knee had decided to remind me that my old age was creeping up closer than I wanted to admit. Running had been pretty much out of the question for the four weeks leading up to the half marathon. I had managed a few miles here and there, but for the most part I couldn't get through more than a half mile at a time without any pain. I was seeing a physical therapist and icing and foam rolling like my life depended on it, and even though it didn't seem logical, I still convinced myself that come race day the adrenaline would kick in, my knee would magically feel amazing, and those thirteen miles would fly right by.

It's probably a good thing that I didn't write this post on Sunday night, or even the next couple of days, because mostly all you would have seen on this page was a lot of really bad words, mixed in with some blabbering about knees and hips and ankles and muscle cramps, and I am never running again in my life, ever, ever, ever.

But like I said earlier, I'm a bit of a procrastinator, and because of my laziness busy schedule I've now spent the better part of the week thinking about my race and letting my body recover.

The race was hard. Really hard. Probably one of the hardest things I've done, physically and mentally, in my life. The adrenaline did kick in, for like the first mile. And then maybe again when I saw Mike, Anna, my mom, and T.J. around mile eight. And then maybe, maybe, it sort of gave me a slight nudge when I finally saw possibly the two most glorious words ever posted on a banner: finish and line. Mostly by that point, though, I was just trying not to throw up.

I won't go into a bunch of boring details of how much it sucked, though, because parts of the race were awesome. Crossing the Ambassador Bridge. High five-ing and getting cheered on by strangers. The woman who kept shouting, "I'm forty-four! And I'm running a marathon!!" Smothering my baby girl with kisses as we ran by, and the pride that I felt when she saw her mama cross the finish line. The hugs from Mike when it was over, who let me escape so many early Saturday mornings to run, and endured my non-stop obsessing over my knee. The fact that my sister, who was totally healthy and who once aspired to finish in under two hours, stuck by my slow, gimpy side the whole race without so much as a complaint, despite my moaning and groaning and the evil glances I was shooting in her direction. 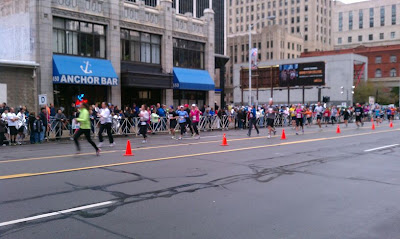 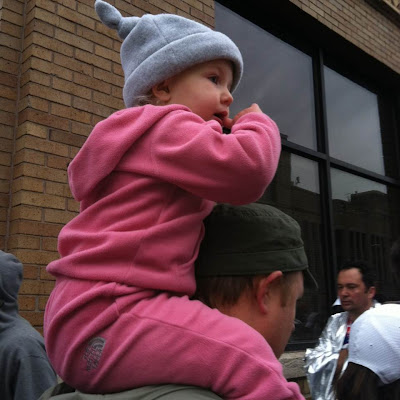 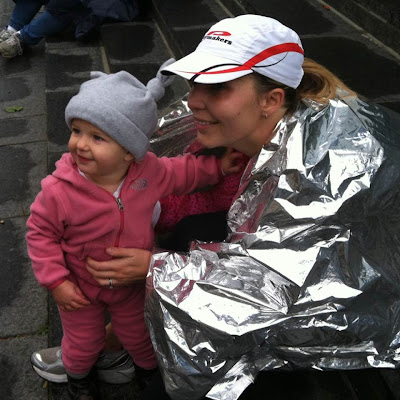 Not to toot my own horn or anything, but toot toot, y'all. Because at the end of the day (well the end of the week, really), I am able to look back on it and see that while, yes, it was awful and long (so very long) and three of my toenails may never grow back like they should, it was also empowering and inspiring and a sweet reminder that I am a strong, capable, healthy woman who has much to be thankful for.
Posted by Leslie at 11:43 AM 2 comments

Email ThisBlogThis!Share to TwitterShare to FacebookShare to Pinterest
Labels: Adventures, Half Marathon, Rocky Balboa, The Big 3-0

Keep Your Eyes On the Prize

The knee is not cooperating. Just over a week until race day, and my plan of conquering the last month of my twenties by gracefully running through the streets of downtown Detroit (and Canada, eh?) might be replaced with hobbling and limping in a not-so-pretty fashion. And it might not be what I had in mind, what I have been envisioning since I started training in July, but that's okay. I'll take what I can get. Even if it takes me four hours to cross that finish line. (Many apologies to Mike, who will be the one stuck waiting for me.) As my mom always likes to say, if not being able to run a half marathon is the worst of my problems, I'm doing pretty good.

Remember my brother-in-law? With the broken neck? Yeah, he was the one last weekend encouraging me as I was heading out for a run. (Side note - he also just cleaned my kitchen. I guess it's safe to say that I've been slacking on my housecleaning skills when the dude with the neck brace is scrubbing counters and washing dishes. Sorry, Kristin!)

Last weekend, Mike and I had the chance to sneak away for the day to enjoy some grown-up adventures. For as long as I can remember, we've been talking about heading over to Grand Rapids - Mike's cousin and his girlfriend live there, and anytime we see them there's much conversation about visiting. Finally, Mike and I got it together, and we couldn't have  picked a better weekend. The weather was beautiful, and Art Prize was going on. It was an awesome day of meandering around the city with Nick and Emily, checking out some amazing art, and not worrying about nap schedules or diaper changes or what Old McDonald had on his farm. And oh yes, there was beer. 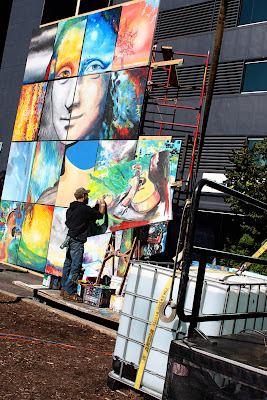 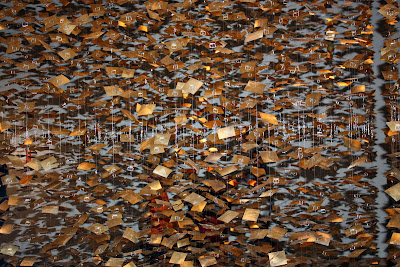 I felt a little silly that I have never ventured over to Grand Rapids before, because it seems like a really cool city. And if you ever have the chance to check out Art Prize, I really, really recommend it.

The rest of the weekend was filled with football, trips to the cider mill, and (say it with me, people!) donuts!! 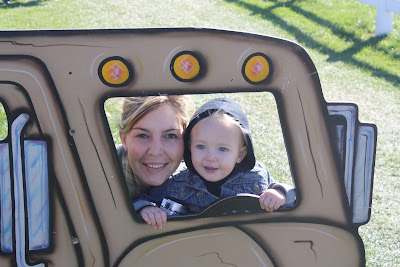 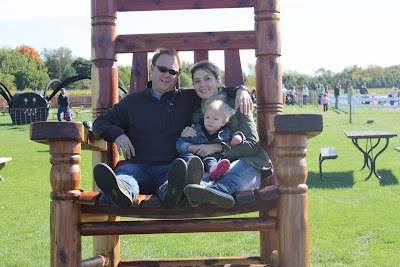 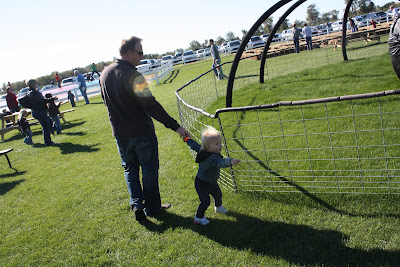 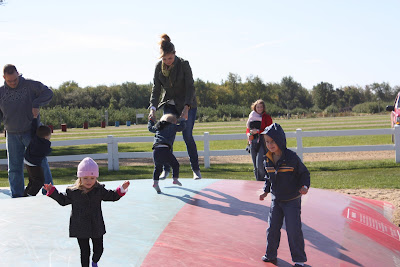 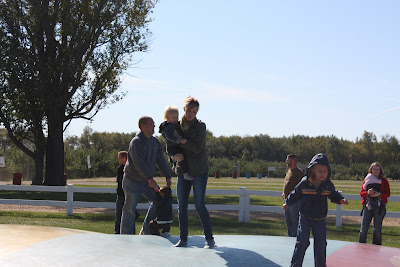 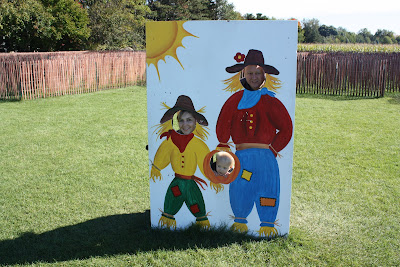 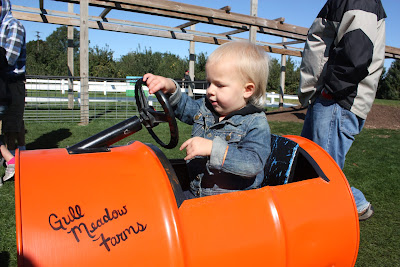 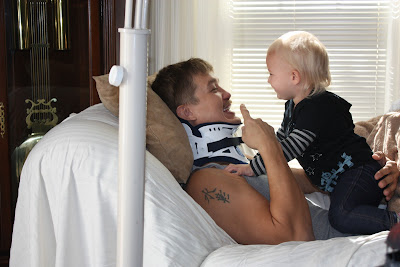 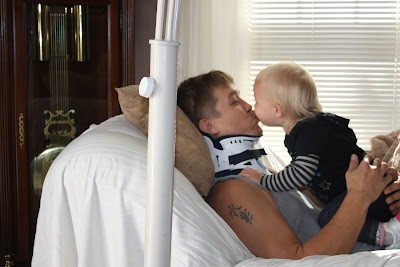 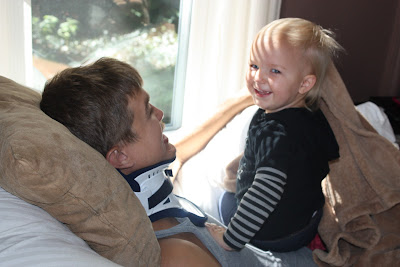 Yes, mom, you are right. I think, bum knee or not, I'm doing pretty good.