You Can't Have 'No' In Your Heart

There's a running joke around our house that Anna has, by leaps and bounds, the coolest hair of anyone in the family.

And when I say coolest, I mean "looks the most like Joe Dirt". 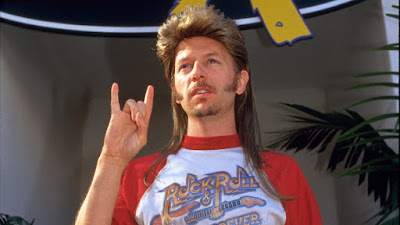 Leading up to her birth, I was convinced my baby would enter the world with a head full of long, flowing locks. Heartburn doesn't lie, does it? And according to all the old wives' tales, constantly reaching for the Tums during pregnancy means  your kid will pop out ready to be the next Pantene model. Well, it turns out all the old wives are full of it, because Anna had barely a fuzz covering her noggin - a fuzz that stayed put well beyond her first birthday.

Finally, though, her hair did begin to grow.

Except. Well, except for one small problem. Her hair is growing, yes. But it is only growing in the back.

People, my child has a mullet. She is business in the front and party in the back. She could get through a security checkpoint into Canada without a problem or a passport of the paper kind . I'm pretty sure any hockey team would give her a spot on their roster simply by looking at her. It's hard core.

On a good day, she resembles Florence Henderson in her Brady Bunch days. 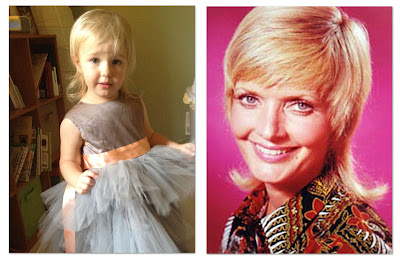 On a bad day? Well, let's just say that she would fit right in with Billy Ray and his achy, breaky heart.

She was born in the South, after all. Maybe this is her way of telling us she wants to be a country music singer when she grows up.

Sure, we could cut it. But then how in the world will we torture her with pictures when she's a teenager?

We've tried putting in cute little barrettes or headbands to distract people from what's really going on - usually involving bribery in the form of gummy bears - but they never seem to last longer than an hour or two. I have to say, despite the fact that she is still mistaken for a boy (with a really bad haircut) on almost a daily basis, the idea that my daughter could easily be an extra in a White Snake video makes me smile.

If that's not love, I don't know what is.

Now if you'll excuse me, I'm off to enroll Anna in guitar lessons and buy her some cowboy boots. And maybe add a little hair-growing serum to her milk while I'm at it...