The good news is that it's February 11th and I've actually kept up at least part of my New Year's resolutions.

The bad news is that it's not the part where I write more on my blog.

For those of you paying attention, that means that I've made our bed every single day since the start of 2013! It might not happen until three in the afternoon, but it happens. And I know some of you might be all like, "Not impressed." I don't blame you. It's probably a totally normal occurrence for most people. But it should be obvious to you that I, especially when it comes to matters of staying organized and mess free, am not like most people.

I need to start small. I need clear-cut directions. If I get overwhelmed or intimidated I lose focus. Remember when my sister helped me get organized? It didn't all stick, but the parts that did involved a label maker and specific instructions on where things go. Our bathroom closet is filled with sets of plastic drawers that say things like "First Aid" or "Dental" or "Shaving Needs" and in a shocking turn of events, I can go to those drawers almost two years after Kristin helped me set them up and find Neosporin or razor cartridges or nail files exactly where they're supposed to be.

I'm also this way, I've realized, when it comes to running. For so many years, I would think "I want to be a runner! I'm going to go running!" And then I would lace up my shoes, hit the pavement, and feel like keeling over ten minutes later, muttering curse words under my breath and vowing never to run again because running sucks. Then I read an article about this plan called the "Couch to 5k". You start small - like running for 30 seconds at a time. But it doesn't suck at first, so you keep at it, and then before you know it you're eight weeks in and you can run 3.1 miles without stopping. There is a specific schedule, and if you follow it, it works. I've actually done this program at least three times - once before Mike and I got married, another when Anna was about nine months old, and I finished it again a few weeks ago. I never, ever, thought I could be a runner, and then I ran two half marathons in one year. Luckily, my friend Katie and I just decided to train for a 10k, because I know that I need to follow a training schedule to stay motivated.

So I guess my bed-making resolution was kind of my attempt to start "training" for a more organized house. I'll probably be in training for a reeeeally long time, but that's ok. It's working. Our bedroom is staying neater. It's amazing what a smoothed bedspread and fluffed-up pillows will do for your overall attitude - it's spilling over into how often I deal with the pile of clothes I let accumulate at the foot of the bed and how often I vacuum. Maybe I can call it my "Slob to Neat Freak" training plan? And maybe, just maybe, it could actually work?

All you neat freaks out there - what should be my next step? What's something small (remember, baby steps!) that I can add to my daily routine that would help me reach my goal? 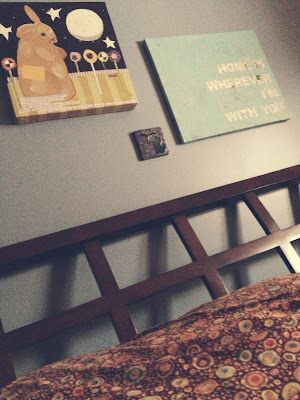 And I know I keep saying it, but I'm really going to try to make the time for this space more often. I always feel like I need to write these epic posts, when really, all I should be doing is documenting our everyday lives. The neat and the messy.